Our top 6 things to do in Halkidiki with kids

Greece is becoming a bit of a haven for European travel bloggers, the food is amazing, the islands are 100% instagramable and the accommodation covers all basis from 5 star luxury to local homestays. Most will head for the Islands and they are definitely beautiful but for somewhere a little quieter, I recommend mainland Greece. Here’s what to do in Halkidiki with kids and why you should definitely visit. So if you’re wondering is Halkidiki good for families the answer is definitely yes!

This post may contain affiliate links. This means I receive a small fee if you book via this post at no extra cost to you.

How to get to Halkidiki, Greece

It’s easy to get to Halkidiki for families and easily accessible from many airports in the UK. It’s around a 3 hour flight from the UK with loads of airlines offering cheap deals both in and out of season making it an affordable and easy place to holiday with kids. Halkidiki is in the North of the Greek mainland and is easily accessible via Thessaloniki airport. Have a look at Skyscanner and choose “Cheapest Month” to find great value flights to Thessaloniki.

We visited Halkidiki  in April this year and although the sea was a little too cold to swim in, the sunshine was a glorious change for the grey and miserable UK.

Halkidiki has 3 peninsulas (fingers) and we stayed on the middle one, Sithonia. It was virtually deserted in April – the Greek season tends to run from May till October so many towns and beaches were shut up but we still found plenty of places to visit and things to explore.

My favourite things to do in Halkidiki with kids

One thing Greece has in abundance is beaches, they range from white and sandy to rustic and pebbly but each enjoys crystal clear waters and plenty of room to play. If you’re looking for information about Halkidiki for families, I’m betting you’ll want to know more about the best beaches. As mentioned a few, although sign posted, were closed off in April but we still managed to find some gems.

Located on the South East of the Sithonia peninsula, this was my favourite. There’s not much else in the town of Kalamitsi but the stunning scenery will make your visit worthwhile. The rocks reminded me of Thailand and the sand was as soft as I’ve felt. If youre wondering what to do in Halkidiki with kids, I’d head here first.

The water is shallow, so perfect for a paddle or for the stronger swimmers, there’s a little rock formation you can swim out to. As if that wasn’t enough we watched a couple of dolphins playing in the surf – I think I may have found my happy place.

If you’re anything like us and enjoy a cold drink on a beach visit, there’s a cute restaurant, right on the seafront, where we could sit and relax whilst Piper played in the sand. We even watched the owner take his boat out to sea to collect his catch of the day!

Our other favourite beaches in Sithonia included:

The largest natural harbour in Greece, with the land formation making it feel like you’re lakeside, rather than at the sea. It’s very quiet and a fairly thin stretch of sand with few facilities and a little bit pebbly, a great place for skimming stones!

It’s port is where most fishing boats in the area unload their catch meaning you’re pretty much guaranteed fresh seafood.

Neos Marmaras is a cute fishing village about halfway down the west coast of Sithonia. It has 4 blue flag beaches and plenty of little shops and restaurants and a trip to the village is a fun thing to do in Halkidiki.

The fishing boats are pretty, it’s a great place to pick up any holiday essentials, the sea is calm and the beaches are sandy. Heaven! 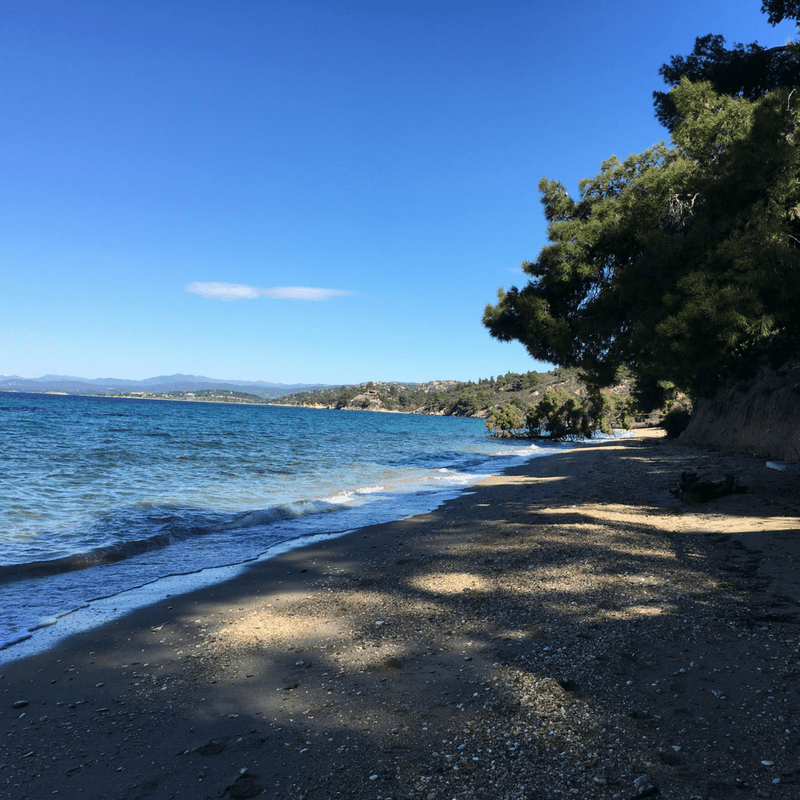 This is a small, private stretch of beach right outside our hotel, The Athena Pallas Village. The water was crystal clear, the sand was soft on our toes and it was extremely quiet. A great place to begin or end your day with a quick stroll.

There are loads of educational things to do in Halkidiki with kids. Aristotle Park has to be one of the least well known. Billed as a theme park, but actually more of a play park, it’s located in the North East of Halkidiki, about 5 mins from Ancient Stagira – the birthplace of Aristotle. When you’re planning what to do in Halkidiki with kids, this should be high on your list.

We were blown away by this park, it’s around €5 euros for adults and free for kids and doesn’t appear to ever get too busy.

The park is full of interactive scientific instruments, all of which were mentioned in Aristotles textbooks which makes it a perfect place to get hands on and teach kids some basic physics. I thing this was one of Pipers best places to visit in Halkidiki.

There’s a sunclock so you can tell the time and date from the sun alone, telescopes, beautiful prisms and a very tuneful pentaphone.

Our favourite had to be the parabolic reflector – two huge concrete dishes, set meters apart. If you whisper into the centre of one, you will be able to hear it in the centre of the other. It totally felt like magic!

There are some great views out to sea and a nice looking restaurant although we didn’t try that out.

This is a must visit for any little history buffs looking for the best things to do in Halkidiki. This cave is back out west towards Thessaloniki and is 300m above sea level.

The cave is said to be over a million years old and is where the oldest European human remains were discovered, thought to be from around 200,000 years ago. You wont see the remains at the cave but you will get to wander through the amazing caverns, dodging stalagmites and stalactites as you head deeper inside the mountain.

It can feel quite claustrophobic, especially when they shut the door behind and you let your mind drift to how much old rock is surrounding you but just remind yourself how long the cave has been in existence, protecting prehistoric man and various predators.

It is by no means a swish tourist attraction, there’s a little landtrain from the car park up to the cave (€2 cash only), we took it up but walked back down in about ten minutes. You are not allowed in the cave without a guide for safety reasons and we had to wait about twenty minutes for the next one to be available. The guide doesn’t actually explain anything to you but it was plenty fun enough to just explore ourselves.

There’s a selection of local market stalls in the carpark area but nothing in the waiting area for the cave. So make sure you have drinks and snacks to see you through.

Located at 350m above sea level, on the slopes of Mount Itamos on the Sithonia Peninsula. This ancient village was all but deserted in the 60’s and 70’s as it was all but uninhabitable. You’ll still see some overgrown, derelict buildings balancing precariously on the hillside.

These days it makes for a lovely trip out. It is now listed as a protected village and hosts a film festival every summer. We stopped for a wander round the pretty church and schoolhouse. Then enjoyed a coffee at a friendly hillside café, soaking up the views.

Be warned, there is not much heading up the mountain out of the village. The roads are awful, with rock slides and trees growing through the middle. Maybe don’t attempt them unless you’re in a 4 x 4,. We spent about an hour driving a few miles just to get back to a main road. Sometime it’s better to be pre-warned when planning your things to do in Halkidiki!

It made for quite a holiday adventure and we saw some lovely scenery. But was a bit scary at times. I advise you just turn back and return the way you came.

This bustling town was the busiest place we visited in Halkidiki and feels like a true step back in time. Located in Northern inland Halkidiki you can experience the traditional cobbled streets, colourful walls and wooden balconies, typical of Macedonian architecture.

It’s a lovely place to pick up any souvenirs you’re after. Or take a break in the town square watching the locals go about their days. The streets are narrow, the parking’s chaotic but it will give you a great taste of modern day Halkidiki.

The third of the three peninsulas is mainly made up of Mount Athos. A breathtaking mountain towering above Halkidiki. It is one of the most important centres of the Orthodox Christian Church.

It is home to the oldest monastic communities in the world. Women and children are not allowed on the mountain (or in fact within 500m of the shore). We only got this picture but it really is beautiful to see and an intriguing place to learn about. Around 2000 monks live on the mountain, some within monasteries, others in complete isolation.

Have you been to Greece with kids? What do you think are the best things to do in Halkidiki with kids? We would love to hear your thoughts.

If you’re heading off to Europe with the kids this summer, make sure you check out this fantastic Summer in Europe packing list by Erin At Large which covers everything you need for a week away.

Our review of the Athena Pallas Village where we stayed on our trip, it’s a great hotel in Halkidiki for families.

Or our top ten traditional Greek foods to try on your next family holiday.