I’ll admit it, I’m not a Game of Thrones fanatic. I’m still on series five and slowly working my way through (no spoilers please). But when I was researching unusual things to do in Bilbao with kids, I just knew we had to visit the islet of San Juan de Gaztelugatxe. Or more recently known as Dragonstone.

How to get to San Juan de Gaztelugatxe

Located just 21 miles from Bilbao, it’s a relatively easy drive to get to. Once you hit the coast at Bikio the scenery will keep you going until you reach the car park.

If you don’t have a rental car then you can easily jump on a bus in the centre of Bilbao. Take the bus number A3518 from Plaza Moyúa square to Bakio then change on to the 3524 to Gaztelugatxe.

If you’re feeling particularly energetic you can hike from Bakio. Judging by the road I’d say this is completely doable but maybe not in the height of summer. Doing it with kids will take under an hour for this part. You’ve still got a 1 km hike down the cliff face. Then another 240 steps once you’ve crossed over onto the island and then the same back the other way.

When we visited we saw at least three carparks and another one being built. I guess they’ve had a recent influx of visitors. It was a little confusing. We drove straight past the turn off at first, trying to drive down the Cliffside but soon hit the dead end signs, turned round and easily found it on our way back.

This post contains affiliate links. This means I may receive a small commission if you make a purchase through these links. At no extra cost to you!

I think I would have fallen in love with this place even if it had no GoT credentials. It’s a stunningly beautiful destination and a must for anyone wanting to experience the true, rugged Basque Country.

The walk down the the coast takes you past the beautiful colours of the Basque countryside. When you reach the bottom, make sure you take a break and soak up the views out to sea. The beach is black, rocky and the waves violent but that all adds to the drama.

The bridge out to the islet is amazing and I think this is the best place for a photo.

Once you’ve crossed the bridge, it’s up the 240 steps to the chapel at the top.

This small Church is dedicated to John the Baptist as he apparently visited the island. It’s said to be good luck to ring the church bell three times. Worth a try to help you get back down.

The building isn’t the original, having been destroyed and rebuilt several times over due to fire, looting and the Basque weather. The actual Dragonstone Castle you see in the series is CGId in.

Gaztelugatxe is estimated to date back to the 9th century. I always find these super old places fascinating. You can almost feel the history on your visit. It’s great introducing the kids to somewhere so old and entertaining them with stories of pirates and fantastical storms. I’m sure they will have no idea who Daenerys Targaryen is!

How hard is the hike to Dragonstone

It’s honestly not that hard, Piper – who is 8, managed it just fine. Mr AWTYK was suffering from a horrid cold on the day we visited. Unusually for him, he found it a bit more difficult. 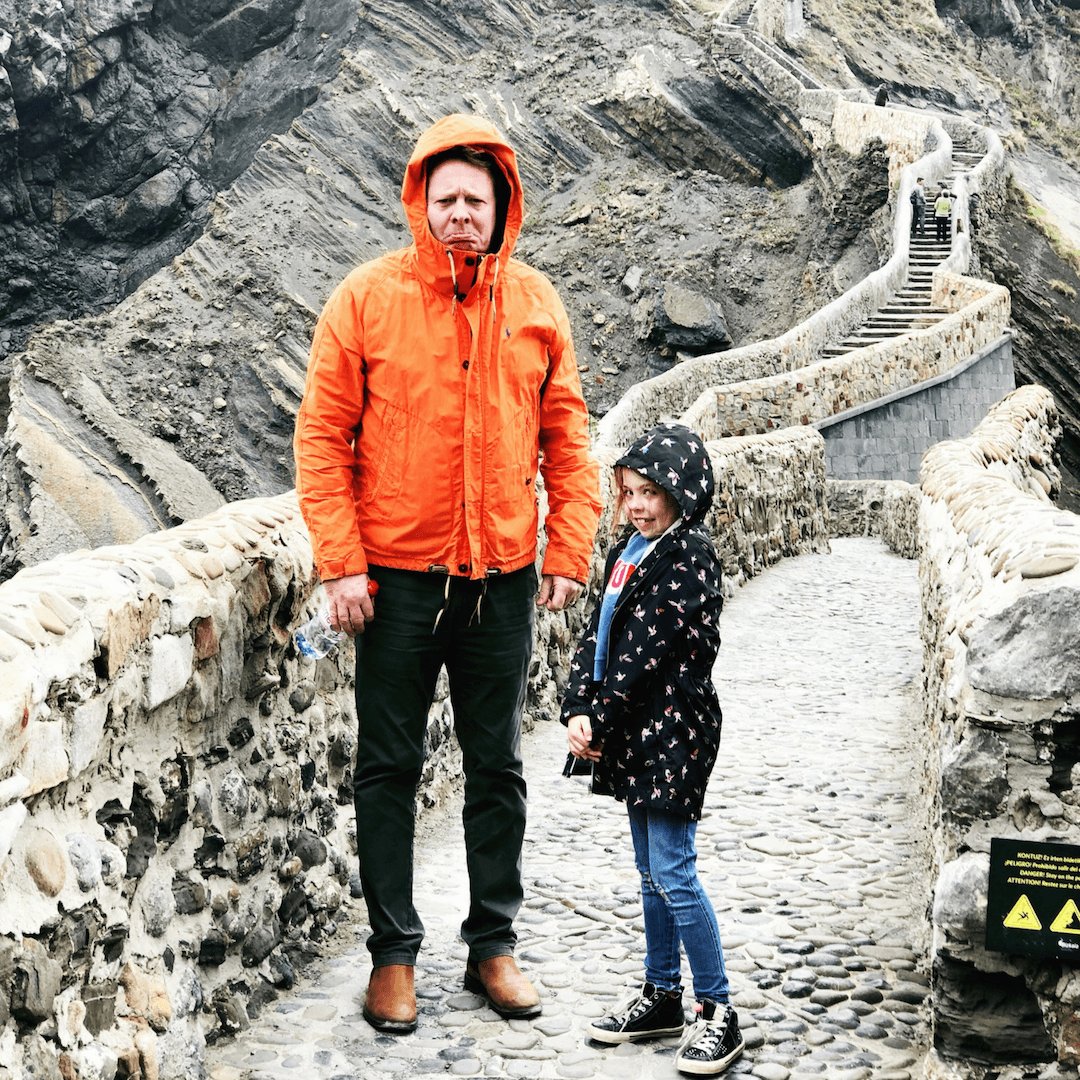 It can be pretty steep going down and the steps up to the chapel (once you cross the bridge) are hard going on the knees. But most levels of fitness should manage it.

The path is pretty stoney so I wouldn’t recommend taking a stroller and its definitely not wheelchair accessible. If it’s a rainy day the path can get fairly slippy. Take it slow and keep the little ones close.

Not wanting to state the obvious but wear the right footwear. Sturdy hiking boots or at the very least a pair of trainers. I’m sure you could do it in flipflops but at best you’re sure to come back with blisters. At worst you may lose your footing and have a nasty fall.

Since appearing in Game of Thrones, San Juan de Gaztelugatxe has become so busy it is now necessary to book tickets for peak times. It is still free but obviously they need to manage the number of people doing the hike at any one time. 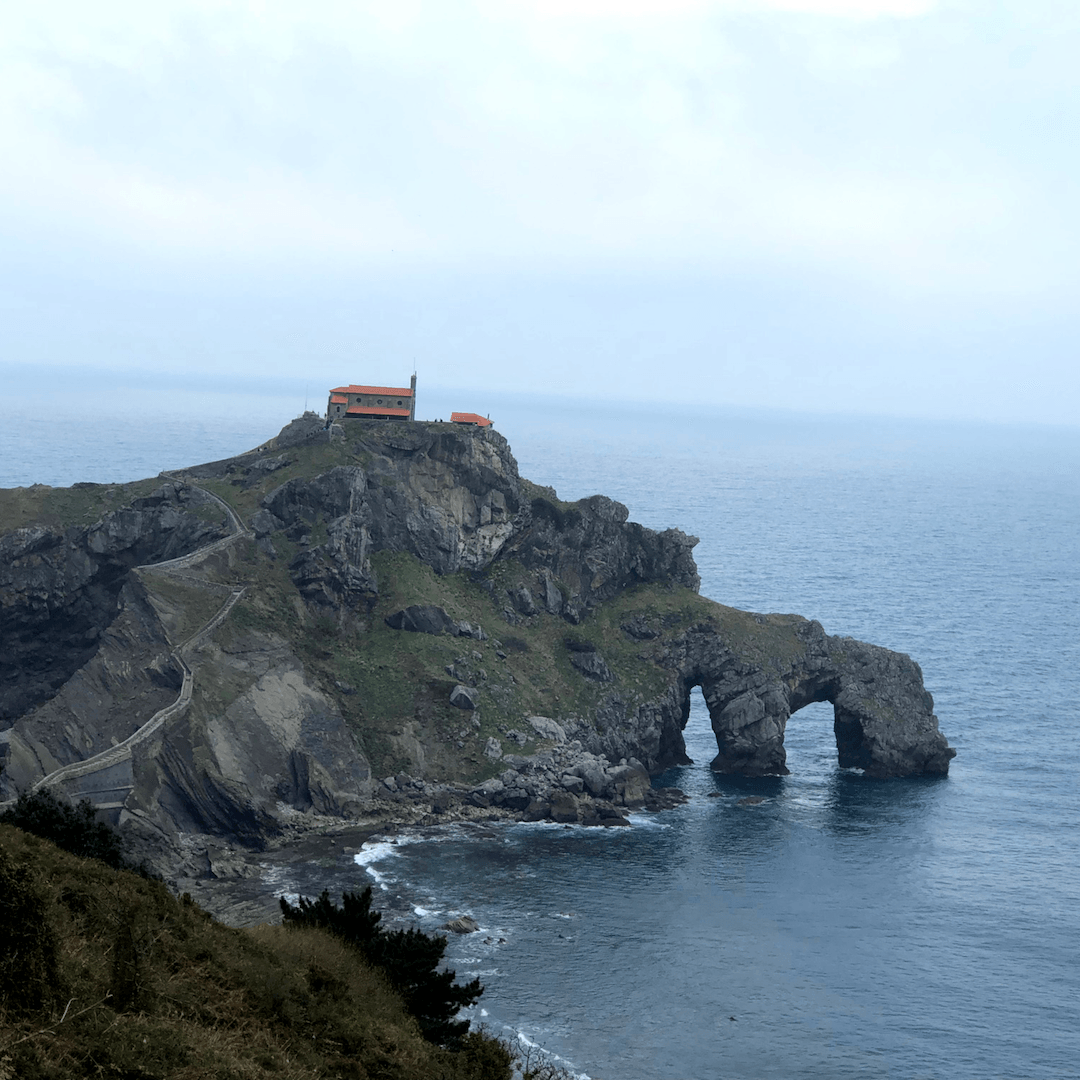 We were there in April and didn’t need to book. However if you plan to visit between June and September or during a Spanish holiday, book tickets for San Juan de Gaztelugatxe here to be on the safe side.

There is a lovely restaurant, Eneperi near the car park for Gaztelugatxe which looked pretty decent. Not to mention with great views out to Dragonstone! They also have a delightful beer garden if you just fancy and drink.

We were headed to Donostia San Sebastian so treated ourselves to an ice cream from the food truck instead.

For easiest access to Dragonstone, you’re going to want to stay in Bakio or Bermeo. Most places you find will be small guesthouses. You could try Manuko Benta which looked absolutely delightful.

We stayed in The URH Palacio de Oriol in Santurtzi, about half an hour outside of Bilbao. This is a lovely hotel near the Vizcaya hanging bridge.

Or you could go for a hotel in Donostia San Sebastian. Which is often said to be the prettiest city in the Basque Country. The Silken Amara Plaza looks gorgeous and is about an hour and a half drive to San Juan Gaztelugatxe.

See below for what Dragonstone looks like on screen or you can see more images on the Game of Thrones Fandom page.

Make sure you pin for later so you have all the information to head for when you visit Dragonstone Castle at San Juan Gaztelugatxe. 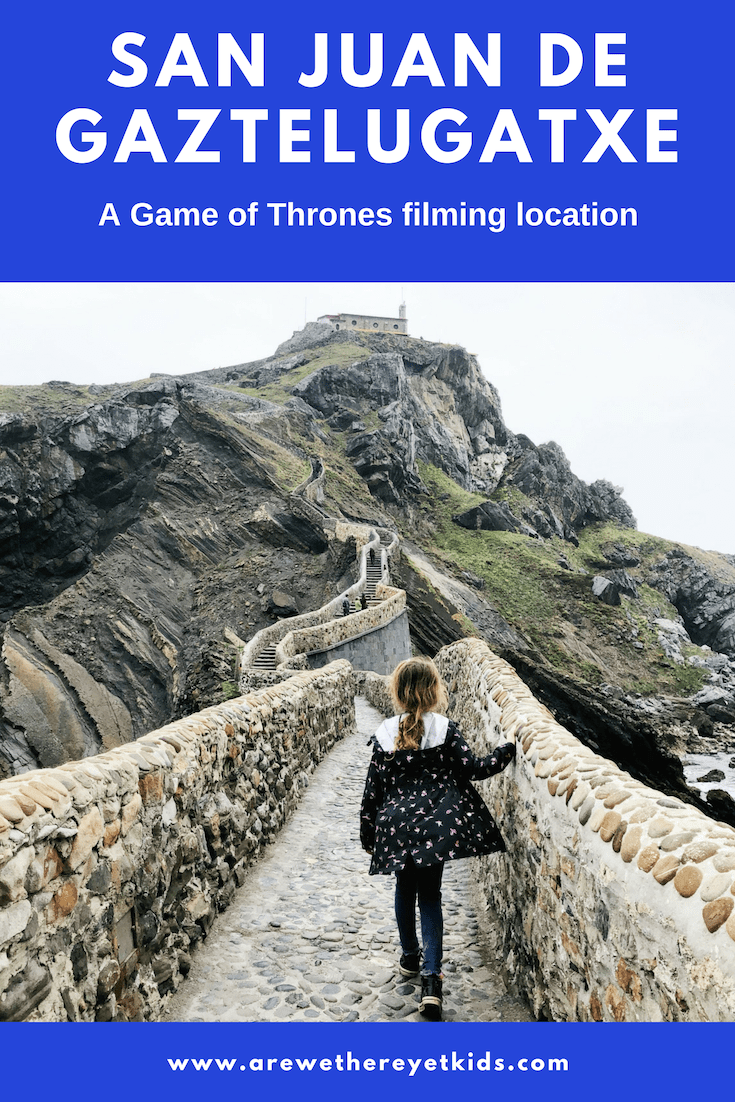