Looking for Boston Park Plaza Hotel Reviews? Boston, USA is well known to be one of the most expensive cities in the world to book a hotel room but even knowing that I was surprised when I started researching where to stay for our upcoming trip. I finally decided on the Boston Park Plaza, a four star hotel within easy walking distance to most of the cities attractions. (Although to be honest, most places are!)  Much like the city, the Boston Park Plaza is a hotel steeped in history, the hotel has been a destination for Presidents since its opening in 1927, and all but two US Presidents in that time have stayed there, I was sure that would make it a good choice!

The Location of the Boston Park Plaza

Situated in the Back Bay area of Boston, we were pretty pleased with the location, about 25 mins in a taxi from the airport and 5 mins walk to Boston Common. It has a brand new Starbucks on the ground floor, is next door to an Irish pub and a couple of minutes from the Boston T (the subway) Arlington St. (Green Line) and Back Bay (Orange Line) stations.

The Rooms and Hotel

The lobby is supper impressive, with a bustling bar and restaurant area in the middle. There is a tiny gift shop, although it was never open when we were walking through.

The rooms unfortunately are less impressive, the standard ones are tiny, with practically no space to unpack and absolutely no view. There is a bath but  the bathroom is pretty cramped. The but is super comfy however the aircon unit was so noisy you may not be able to get a good nights sleep – it may just be me but I don’t think you can control it from the room either. They could also do with changing the blackout blinds, black out they did not!

Facilities at the Boston Park Plaza

The Hotel has a fitness centre which is rare in central Boston but no pool. Not that you will need one with all there is to do in the city. You’ll be having too much fun at the Boston Childrens Museum and the awesome Museum of Science.

They offer valet parking for $51 per night (gulp) but you really don’t need a car.

They allow pets in the rooms (max two dogs per room) and charge an additional $75 for extra cleaning.

The Boston Park Plaza offers room service from 6am – 11pm.

On our first morning, the super friendly concierge noticed Piper and I and asked her if she had received a gift yet. He then pulled up a truck of toys for her to pick from. She chose some sunglasses which was a really lovely touch. I didn’t see any other special features for kids. 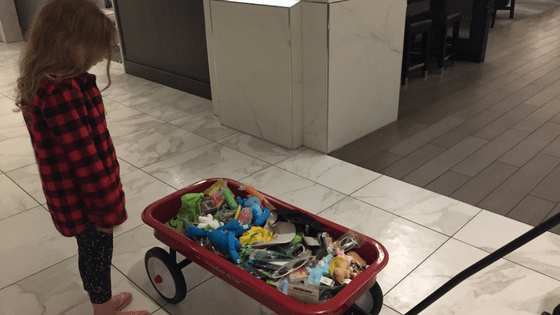 The Food at the Boston Park Plaza

“Off the Common” is Boston Park Plazas lobby restaurant/bar, which is open for breakfast, Lunch and Dinner. We didn’t eat there but had a drink one night at the beautiful, traditional style bar area.

M.J. O’Connor’s Irish restaurant is just steps from the front door and offers a huge selection of beers, American/Irish eats and a nice atmosphere.

Located just off the lobby is the STRIP by Strega steakhouse offering fresh seafood, homemade pastas, reinterpreted sides and specialty steaks and chops.

Starbucks, just off the lobby is where we ate all our breakfasts. It’s brand new, has free wifi and opens at 6.30am. Perfect for the jet lagged blogger!

We paid around £150 per night, booking around 3 months in advance which for Boston is very good value. Just be careful of any extras such as Wifi, phone calls and parking, it soon adds up to make it very poor value. They charge a fortune for Wifi in the rooms so we didn’t use it. It’s free in the lobby and the Starbucks so if you can, I recommend only logging on in public areas.

What they didn’t get right

On our first night, my daughter dropped her toothbrush down the side of the sink. As you can see from the pic, it looked like it had never been cleaned down there. Unsurprisingly the toothbrush wasn’t moved during our whole stay.

On receiving our bill, I noticed we had been charged £25 for a five minute phone call I made to Key West – extortionate! On mentioning it at check out, the receptionist apologised. He said he would make a note on our account that I had queried it and maybe or maybe not whoever handles the accounts MIGHT remove it from our bill. Firstly £25 for a phone call to the same country?!? Secondly, surely this should have been removed or not at check out, pretty poor customer service.

It’s a preferred hotel for many airlines so loads of flight staff stay there. Meaning if you time your check in/out wrong, you may need to queue for a long time.

In summary parts of this hotel are beautiful and many of the staff are super friendly. But we wouldn’t stay there again, just too many little niggles I’m afraid.

If you’re in Boston with kids, make sure you follow the Freedom trail. It’s a great way to explore this historic city.