Everything You Need To Know About Visiting Bologna With Kids

When deciding where to go in Italy with kids I implore you to consider Bologna for at least part of your visit. For some reason it’s so much quieter than many of the more obvious Italian cities but it still has plenty of the culture, fun and beauty that makes Italy such a popular family holiday destination. Add that it’s the home of Bolognese and we definitely didn’t need much more convincing! These are our favourite things to do in Bologna with kids, where to stay and of course what to eat!

This post contains affiliate links which means we receive a small fee if you order from some of the above links at no additional cost to you!

Fun Things to do in Bologna with kids

Climb the Due Torri (Two Towers)

Contrary to popular belief, the leaning tower of Pisa is not the tallest, leaniest tower in Italy, that title goes to the The Asinelli Tower which is in the centre of Bologna. One of a pair of towers standing majestically over the city, they’re not as intricate as the one in Pisa but to me they are breathtaking. Climbing it is one of the most fun things to do in Bologna with children.

You can walk the 498 wooden steps up to the top of the Asinelli, it’s exhilarating, mentally challenging and provides the best views of the city there are. Older kids will love the slight sense of danger going up but I wouldn’t recommend taking really little ones up, this probably isn’t the thing to do if you’re visiting Bologna with toddlers.

Read all about our trip up the Two Towers in our Due Torri review and see more stunning pictures of the city.

This will earn you serious brownie points if you’re looking for things to do with kids in Bologna. Don’t just buy and eat delicious Italian gelato, try making your own and learn about its history in the process. A full museum dedicated to Gelato you say? I was sold on that alone but the Family Gelato experience at the Carpigianno University (yes there’s a gelato university as well!) goes above and beyond the usual food making demonstration. Kids can get hands on and make their own, taste a million (almost) flavours and learn about the difference between gelato and Ice cream (quite a lot it turns out!)

Read all about our family experience at the Gelato museum here and discover why it is one of the most fun things to do in Bologna we found.

Wander the streets around the Piazza Maggiore

This Piazza feels like Bologna’s bustling hub. The streets surrounding the Piazza Maggiore are full of fresh produce stores and delightful restaurants. Buildings that would stop you dead in your tracks anywhere else in the world and are given no special treatment here. Everywhere you look is another photo opportunity.

This is also where Bologna Welcome is situated, you can pick up your tickets to the Two Towers or other attractions. 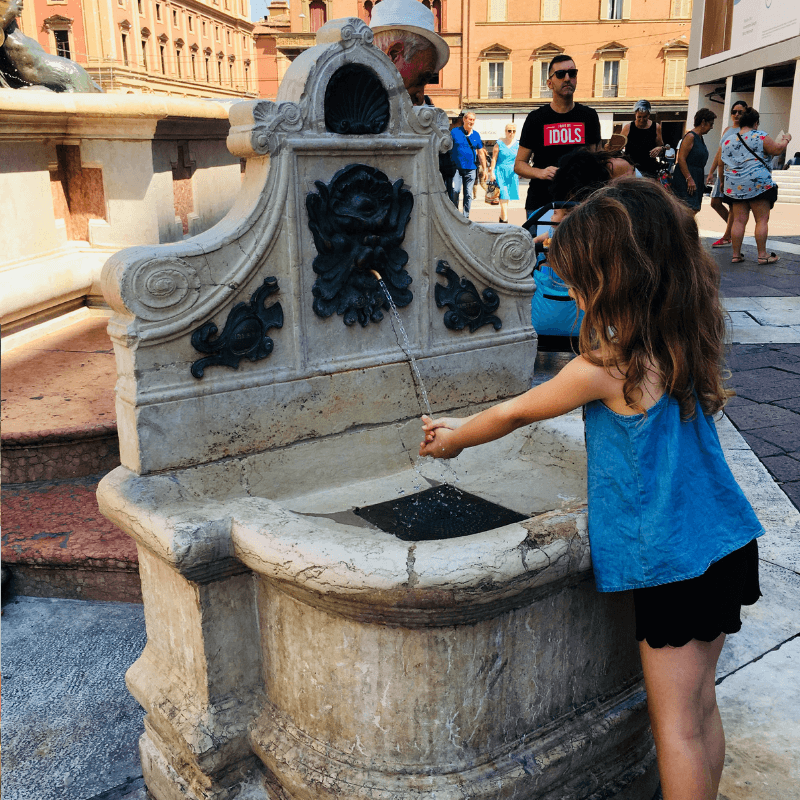 The Piazza itself is always full of fun and is a lovely place to take a break. We enjoyed some Italian style tapas and a glass of wine whilst watching the world go by.

On top of the gorgeous, ornate buildings surrounding the square, events are held in the Piazza year round. There’s an open air cinema in the summer months. Showing traditional Italian movies, indie gems and sometimes silent films accompanied by an orchestra. Possibly the greatest cinema in the world!  You can view the schedule for the Sotto le Stelle del Cinema here

As any family traveler will know, a sure fire way to appease a screaming kid is to hunt down an outdoor playground. I’ve always found that letting my daughter run free for half an hour or so makes the rest of the day much more enjoyable. Bologna has several parks and playgrounds you can visit. The Giardini Margherita is the biggest of the parks with plenty of green space and a pretty little lake to explore.

Eat all the Italian food

One of Bolognas’ nicknames is The Fat One and I completely understand why. The focus is on fresh, local produce and everything we tasted was delicious! Obviously there’s the pasta, my daughters favourite meal is Spaghetti Bolognese, so she was in heaven. You don’t get it with spaghetti in Bologna – that’s a southern Italian pasta. It’s served with tagliatelle, apparently the correct pairing, who knew!

But don’t just restrict yourselves to pasta and pizza. There’s all the cured meats, smelly cheeses and delightful fish dishes to get through.

With the city being so close to Modena, we also tried some delightful Balsamic vinegar. It seems to go on everything. Try it on your strawberries, you wont be disappointed!

Many restaurants close after lunch service and open again for dinner. If you’re dining with kids you may want to check opening hours of your favourites and get in early.

Bologna is a university city and therefore feels very young and hip. We spotted various pop ups around the city serving high end street food and craft beers from shipping containers. They make for a lovely place to stop and take a breath. As you can tell, Bologna is a city perfectly set up for taking breaks!

If you’re fans of super cars, Bologna is the place to see them in all their original glory. You’re bound to spot a few around the streets of the city. But for the full experience you can head to one of the many local car factories. Most of which have family friendly museums or experiences.

Try the The Lamborghini Museum where you can sit in some of the most exclusive cars in the world or the Enzo Ferrari museum in Modena (under an hours drive from Bologna) which has a virtual racetrack where you can safely try your hand racing against other visitors.

If you’re keen to combine delicious Italian food and your love of fast cars, Get Your Guide offers a full day Food and Ferrari Tour from Bologna which includes a four course Italian feast, local wine, visits to local food producers and a trip to the Ferrari Museum for just €153 per person.

Where to stay in Bologna with kids

We stayed at the Zanhotel Europa which is just 5 mins walk from the main train station and about 20 mins to the Piazza Maggiore. It had everything we needed for a few nights with kids.

The decor feels very ornate and Italian. It’s a bit tired but we have found that’s pretty standard for Italy. It had fully functioning air con and comfy beds, really all we needed when we were exploring all day.

On doing our research, I also heard good things about Hotel Touring, a small hotel in the medieval centre with a lovely outdoor terrace.

Or the 4 star Metropolitan Hotel which has a gorgeous roof terrace just steps away from the Piazza Maggiore.

Getting around Bologna with kids

We found the city itself to be completely walkable and many things to do with kids in Bologna are close enough for even little legs. We were staying next to the Central Train Station and from there nowhere was over a half hour walk (and it was hot, we were pretty slow!).

You’ll mainly be strolling through beautiful covered walkways protecting you from the sun (or rain). Or tiny, busy streets full of gorgeous shops and restaurants. You’ll want to go in each one!

Parts of the city are pedestrianised meaning you can focus on taking in the beautiful buildings, not checking for cars.

There’s a cute little land train which will take you up to San Luca saving your legs and I’m sure most kids would love it just for the journey! If you’re in Bologna with toddlers, they would absolutely love this activity.

We arrived by train, being on our big Interrailing adventure and the central Station was just over the road from our hotel.

If you fly, Marconi International Airport is just half an hour in a cab to the city centre. It is served by low cost airlines like Ryan Air and Easy Jet.

I recommend having a hire car for at least part of your trip.It will make visiting places like the Gelato Museum and the car factories a lot easier. Plus the Emilia-Romagna countryside is a beautiful part of the world to explore. Go through a reputable agency, we found Italian car hire companies to be a nightmare at best.

As you can probably see, we absolutely adored our trip to Bologna. More so than any other of the Italian cities we’ve visited. We found the people very friendly and it really is a foodie paradise. It is also surprisingly packed full of beautiful historical and cultural architecture. Take the kids to Bologna now while it still feels slightly like a secret!

Get Your Guide has some fantastic organised tours in Bologna to help you get to know the city better.