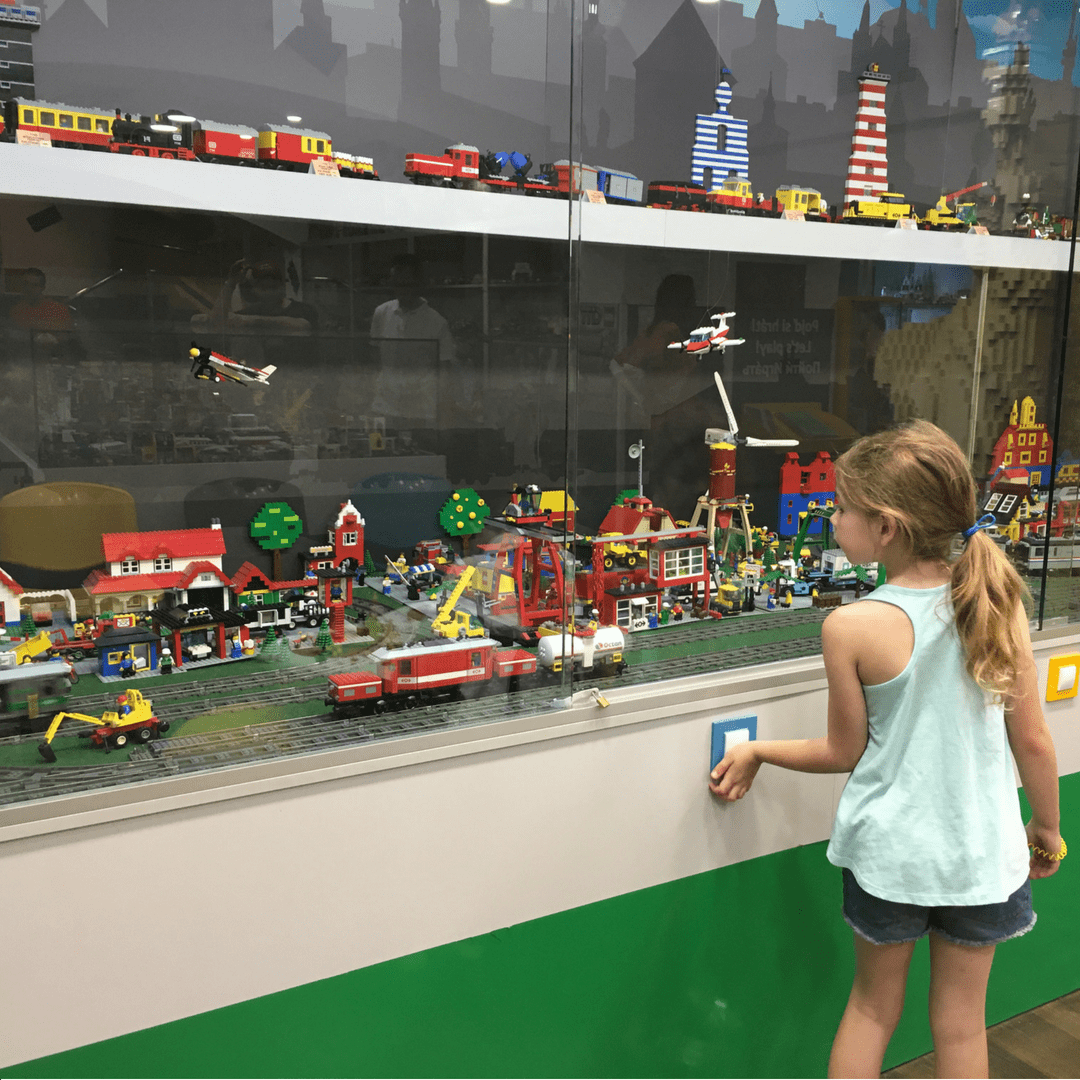 Family Fun at the Museum of Bricks in Prague

I don’t think I know a child who doesn’t like Lego so when I discovered there was a Museum of Bricks in Prague, I knew we had to visit. Piper in fact loves Lego so much we took a couple of packs with us to build on the trains during our European rail adventure and she was super excited to see a whole museum dedicated to her favourite pastime. This is our full review of the Museum of Bricks in Prague.

Location of the Museum of Bricks

The Museum is really easy to find, on one of the main shopping streets in Prague. It’s inside the lego shop so just look for the signs. We managed to walk there (Prague is in general a pretty walkable city) but you can easily get the tram or metro if it’s too hot/wet/cold.

I think it must be an old Bank as there are still some vaults dotted around the building and it looks like one of the play areas is located in a huge safe. It’s set over three floors, I’m not sure how easy it would be to navigate with a wheelchair or big buggy.

First impressions of the Museum of Bricks

We visited in the UK summer holidays so as you can imagine, the Lego shop was pretty manic. You can buy your tickets next to the front door then it’s down a narrow staircase to the start of the museum.

The first room has a huge glass cabinet in the centre containing a full city made of Lego, the detail was brilliant and we could have spent ages spotting our favourite features. Around the edge more models of cars and buildings.

Just look at the detail!

You’ll also see a huge replica of the Statue of Liberty which must have been great fun to build. More than 1 million bricks were used for the exhibits, I can’t even begin to imagine how long it took to create!

Attractions at the Museum of Bricks

The most impressive models in the museum are the historical building models. We especially loved the Charles Bridge (massive) and had fun spotting the various characters crossing it as instructed. As with the real life version, it’s busy with over 1,000 mini figures completing the display.

Being located in Prague, there are plenty of Lego Prague replicas but there is also lots to see from around the rest of the world.

The Taj Mahal was fabulous, it’s the biggest factory set lego has ever built and is made with 5922 bricks!

Most of the cultural buildings were created from the Lego Architecture range, not one we’ve tried yet but will definitely give it a go when we get home.

Most of the cultural pieces have info boards explaining interesting facts about that piece.

They have a large selection of Star Wars sets in the small upstairs area. And plenty of our Lego faves such as Harry Potter and Lego Friends.

It really is mind boggling just how many different sets Lego have launched, there’s Pirates, Vikings, Mummys and of course the popular movie tie ins, even Indiana Jones!

Retro Lego at the Museum of Bricks

Although it did make me feel a bit old, I loved seeing all the retro Lego I remember from my childhood. And Piper loved seeing the displays of some of the bricks she still plays with at Grannys house.

They do have a wide selection and most of the models are dated and have details on build time and how many bricks it took.

Playing at the Museum of Bricks

Most of the models are behind glass or have signs saying don’t touch. They must have taken a long, long time to build.

However there are some tables and play rooms where you can get hands on. We spent a decent amount of time building creations and letting Piper get productive. It’s completely free play, hardly any instructions which may have been a nice and simple addition.

Some of the models are interactive with buttons to press to make things move or light up or make sounds such as the fire tuck, trains and underwater scene.

The shop in the Museum of Bricks which you have to walk through at the end of the attraction is pretty big. It has a wide selection of new sets to purchase. Along with older and more unusual sets you wont find anywhere else.  I thought it was pretty expensive so not really worth buying anything just to stuff it in the suitcase to take home.

There is also a pick-a-brick section where you can buy individual pieces. And a variety of used parts you can purchase by weight.

Final thoughts on the Museum of Bricks

Being home to the largest private collection of Lego in the world this museum is worth a visit just to see all the builds.

Prague seems to be full of small independent Museums like this. They don’t come with the whizz and bang of the Museums in the States or UK. But they are fun to spend an hour or so. Any little Lego lover will love a chance to play here. And if you’ve spent a few days exploring Prague it really is good fun to see all the landmarks built out of little bricks.

Now if someone could just buy us all the sets to build ourselves we would be happy!

What you need to know about the Lego Museum, Prague

There is Free WiFi in the children’s corner.

If you’re in the city with kids then make sure you read this ultimate guide to family friendly Prague. And for another way to pass a few hours check out this post on Guided tours in Prague.

Make sure you pin for later when planning your next trip to the lego Museum, Prague.

We were guests of the Museum of Bricks for this review, as always, all opinions are my own.