Sleeping Beauty Panto at the Regent Theatre in Stoke

Is there anything more festive than a family trip to a pantomime? Oh no there isn’t! (sorry I couldn’t resist). And the Panto at the Regent Theatre is definitely one of the best.

On Friday night we were invited to the opening night of Sleeping Beauty at the Regent Theatre in Stoke on Trent. A few hours of LOLs, escapism and tradition was just what we needed to counter the craziness of the season.

The panto version of Sleeping Beauty

We all know the story, the beautiful princess pricks her finger and falls into an enchanted sleep, only to be awoken by true loves kiss. The panto version stays true to the basic thread but it’s the characters around the story that really sell the show.

For my overseas readers who’ve never visited a pantomime, (it’s worth a trip to the UK just to experience it) they pretty much all follow the same rules. A comedy cutie, down on their luck but full of fun, an hilarious dame with outrageous costumes who mainly steals the show, a wicked villain who receives all the boos and hisses the audience can throw at them and a musical ensemble to tie it all together. The Panto at the Regent Theatre has all of this and more.

Directed by Christian Patterson, Sleeping Beauty is full of all the comedy capers you’d expect with a few local nods thrown in for good measure. It begins with an introduction to the deliciously camp Chi Chi, the Spirit of Stoke, with lights, fire and sequins a plenty. And continues with the over the top comedy scenes that will have the kids giggling and the adults cringing (in a good way). The whole evening was dedicated to family friendly fun, even the programs had a kids activity section which Piper loved completing as we waited for the show to start!

The cast of Sleeping Beauty

Although this was my first visit to a panto at the Regent Theatre, I think I was the only newcomer. The show had plenty of in jokes the audience obviously remembered from years past and I understand several of the main characters return year after year – if it ain’t broke, don’t fix it!

Jonathan Wilkes plays Muddles, the loveable lead, bringing real warmth to the character, Jonathan sings, dances and laughs his socks off for the whole show. He’s well-loved and for good reason, this guy can work a crowd!

Christian Patterson plays Fanny the Nanny, the outrageous Dame, providing the slapstick element of the show, Christian hams it up like no other. The costumes are totally over the top and absolutely fabulous. The hot chocolate number is worth the ticket price alone. 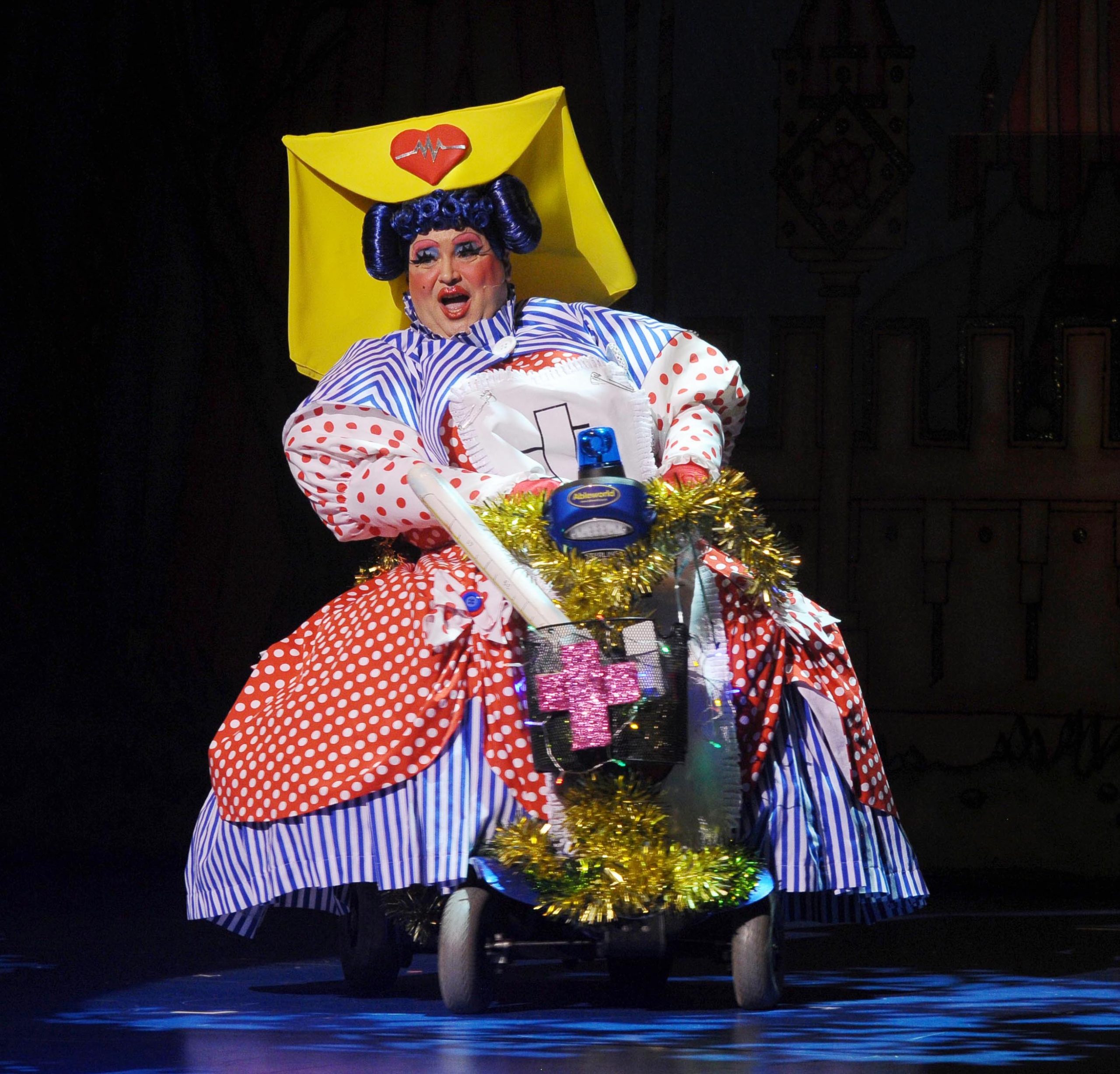 Kai Owen plays King Cyril and absolutely aces some of the more technical tongue teaser lines of the show. (You have to see it). Vivien Parry plays the nasty wicked fairy, absolutely nailing every song and scene she’s in.

All your favourite panto scenes

Sleeping Beauty managed to pack in every panto favourite possible. We had local joke, after local joke, mainly focused on the two football teams in the area. They had the audience singing along, waving our arms and grinning so hard our cheeks hurt.

Whilst I really don’t want to ruin it for you lovely readers there were a few that really deserve mention.

The lip sync scene was so very clever, brilliantly curated and performed with perfect comic timing. Some jokes were of course a little risqué but went straight over most of the kids heads. Piper watched the adults crying with laughter and said “I really need to watch this again when I’m older!”

The tongue twisters were also super impressive, I have nothing but admiration for actors who can keep going even when they’re having a good old giggle themselves. They all received a very worthy standing ovation at the end.

I love the Regent theatre; it’s a beautiful combination of old style theatre glam with all the modern facilities. We first visited to watch Annie the Musical so know their standard of performances are just as good as those we’ve seen in London. They have several bars for pre-show and interval drinks. This time we were in the lower stalls so spent the interval in the ground floor bar. Unlike many theatre bars, it didn’t feel crowded at all.

I love how the Regent had gone to town with its panto decorations. There were plenty of pretty places for a selfie and the Christmas tree in the piano bar was just beautiful. They have all the kid friendly treats on sale from hand held light ups to freshly made popcorn.

When can I see Sleeping Beauty at the Regent?

The Panto runs from now until the 5th January with evening and matinee performances. Tickets start from just £13.

Book your tickets to Sleeping Beauty at the Regent Theatre.

For festive fun, a panto is always top of our list. They can be enjoyed by the whole family and I love the familiarity of the sketches and jokes. Anything that can reduce Mr AWTYK to tears of laughter is worth the ticket to me. Sleeping Beauty may have been the first panto we’ve seen at the Regent but it most definitely won’t be the last.

For more festive fun and frolics in Stoke, check out this list of the best Christmas events in Stoke on Trent

Make sure you pin for later.

We received complimentary tickets to watch Sleeping Beauty, this year’s Pantomime at the Regent Theatre in Stoke but all views and opinions are our own.

This post contains affiliate links which means I receive a small commission if you book via one of these links at no extra cost to you.